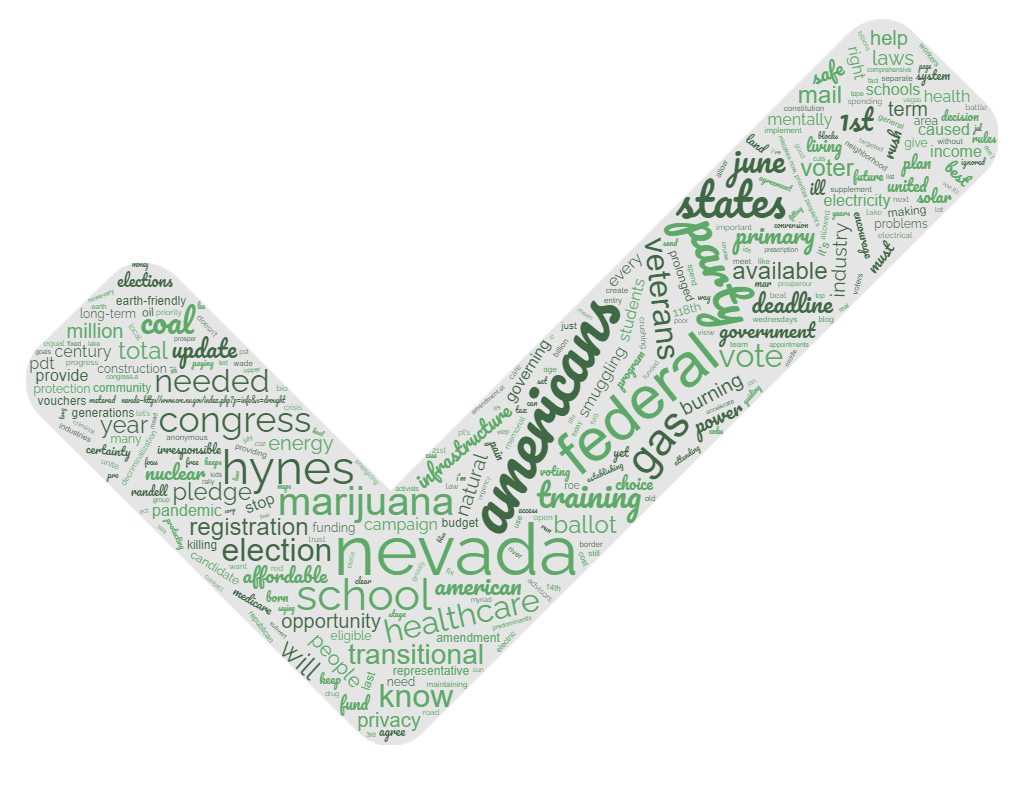 PEOPLE & EARTH-FRIENDLY ENERGY PLAN | BORDER PROTECTION | GET POLITICS BEHIND US & SHINE! | RESPONSIBLE GOVERNING | A VISION OF WHAT COULD BE!

Congress has caused, ignored or prolonged problems for generations while campaigning on promises to fix those mistakes.

It’s Clear that Congress won’t fix Congress. It’s All Up to US make those changes!

Congress needs red & blue Moderation to UNITE US, KEEP US SAFE, Contribute to Economic Certainty, Create Equal outcomes of Opportunity while Protecting the Few and Avoiding Favoring one group of Americans over another.

Let’s get politics behind us and shine!

The 118th Congress will establish the foundation for curing these problems to help Americans prosper in an America that’s rigged in OUR favor!

Government lacks a comprehensive, thought-out plan that takes all factors into consideration. Our daily budgets, national defense and ability to heat our homes are impacted.

A long-term plan that maps these three steps would give Americans a vision of the future that would allow industries to form and mature to accomplish national energy goals which will be more Earth-friendly, reliable and affordable.

RETURN CERTAINTY TO THE GAS INDUSTRY

We need a stable oil industry to keep US safe, maintain affordable pump prices and for natural gas needed to transition from coal to nuclear powered electric plants.

Government narrative and attitudes caused uncertainty in the industry and cost Americans billions of dollars.

The 118th Congress must return certainty to the energy markets. Americans can’t endure the crushing effects of decades of increasing gas costs.

Affordable gas keeps us safe and helps our family budget.

Every senior or family living in a mobile home with heating oil paid $750 more this winter to stay warm.

Every American who commutes to work is paying nearly $1000 a year more.

24/7 COAL BURNING IS KILLING US NOW

Every breath each of Us has ever taken is polluted by coal being burned nearby. Some Americans are more affected than others.

On top of being the biggest contributor of CO2 emissions that climate activists are concerned about, it’s killing Us.

We must accelerate conversion of coal burning to natural gas for all industries in the United States and stop coal exports.

As a model for the world we can confidently implement wide sweeping economic policies to discourage coal burning globally, encourage conversion of existing plants to natural gas, while the United States plays catch up with the world by making Nuclear Power plant construction more affordable here and worldwide.

By stopping the gross pollution of coal burning with a transition to Total Nuclear Power Electricity Plants, the United States can lead the global pursuit of carbon free electricity generation.

Nuclear Power for reliably generating our current, growing and future electricity demands is a pollution free and safe industry.

Nuclear energy has been researched, improved and used safely for most of our lifetimes.

B. Solar PV panels work best to offset electrical consumption of a metered home or business, yet is unreliable for energizing the electric grid.

Community solar gardens for targeted offset of metered electrical use by co-op members should be allowed and organized through State programs.

BORDER PROTECTION EFFECTS US ALL

Resources & innovation are needed to stop smuggling that has caused suffering and death here.

The opioid crisis is being prolonged by smuggling that is killing Americans and forcing States to implement laws making it more difficult to get pain meds needed by some Americans with chronic pain.

“My Father was suffering from the pain of stage 4 lung cancer that was crushing his ribs. I stood at a pharmacy counter here on a Friday afternoon to get his pain meds and was denied because his prescription codes were incorrect.”-Randy

MOST STATES ACCEPT CANNABIS ON SOME LEVEL

The 1970 Federal law making marijuana a controlled-substance should be amended to better align with the acceptance of States and recent American votes.

Banking for businesses in States that allow sales of cannabis products is hindered by Federal criminalization and makes those Americans vulnerable by maintaining cash transactions.

It’s past time to complete this rollback.

Americans imprisoned for breaking marijuana laws should have their cases reviewed after it’s decriminalized with a standard for releasing those without a violent record.

There are over 20 Million people living in the United States anonymously after poor governing allowed mostly anonymous and unaccountable entry and residency.

The real and evident crisis at the border is the distraction of anonymous and overwhelming entry that shields smuggling. With 21st Century technology, sensible segments of wall, and manpower, the border will be secured.

Dispassionate policy is needed to unite America and keep us safe by welcoming all residents to be properly identified, and by protecting our borders from smuggling in and out of our country!

“State and municipal laws that subvert criminal apprehension are troubling.”-RSH

GET POLITICS BEHIND US & SHINE!

“I struggle with the fact that there are good schools and bad schools. I believe Federal requirements to provide School Choice vouchers will encourage school districts to raise the level of education in all neighborhoods.”—RSH

Until then the availability of school vouchers to give all 50 Million American students access to the best schools available in their area is a policy that is long overdue because of politics.

It’s anticipated that once School Choice vouchers are in the hands of Parents who want them, then school districts will become more motivated to raise the standards of schools in every neighborhood.

After taking the US Term Limits pledge I decided to set the example and declared that I would not seek a second term if elected to Congress.

A term limit for Congress Members should be established by law or Amendment, just as it is for the President by the 22nd Amendment.

At minimum a law that requires a Congress Member to step down after establishing an agreement or declaration like the pledge I’ve made here.

“I’ve been told that committing to one term will harm my electability. I’ll take that chance to stand by my pledge.”
—RSH

Most Americans agree we don’t want to return to the way it was before 1973. Roe v Wade must be made law or Amended to the Constitution.

The 14th Amendment right to Privacy that supported the Roe v Wade decision has been seriously eroded by constant intrusions by government on both sides related to the pandemic and attacks on Roe.

“The Republican Party position on keeping Government out of our lives, except in the case of an Americans most intimate decision is the most troubling to me.”—RSH

B. THE PANDEMIC LED TO A TREMENDOUS EROSION OF AMERICAN’S PRIVACIES & LIBERTIES

Federal oversight is a last resort to correct injustices or to encourage Voter turnout without compromising election integrity.

Most Americans agree that IDs should be required for election integrity.

Every eligible Voter can Vote easily. Make Federal General elections a Federal holiday on a Monday to make it convenient.

All unincarcerated Americans should be eligible to Vote.

We now send $4 Trillion a year to the IRS just to maintain a generations old infrastructure. A total overhaul is needed to pay for actual priorities.

Set a long-term spending limit of $3.8 Trillion a year. Agree that’s all we have to spend. Now, what’s most important?

Prioritized Spending—Ask, what current expenditures are more important than paying for all Healthcare of Seniors?

All types of Transitional Training has always been under resourced.

Pay down the debt from natural increases in tax income. Tax income has doubled every Census year except 2010 since 1930 regardless of tax policies.

Any American living on fixed Social Security income should not have to spend one dollar on any healthcare. Seniors deserve total protection and less red tape to get the health services, medications and care needed.

Rebuilding the budget to prioritize Total Medicare for Seniors.

There are many, many cuts that can occur to the Federal government monolith to fund this service and more.

Veterans healthcare is still not adequate, despite 100 years of maintaining a separate and costly system. Appointments to get critical care take months after the standard, “we’ve made several attempts to contact you” letter.

Combine budgets from Medicare, Veterans Healthcare & all the Federal tax dollars for helping the Mentally Ill to supplement States.

“For the $80 Billion spent a year to fund a separate system, the Federal Government could pay the monthly medical insurance premium for every Veteran. Not all Veterans are eligible for healthcare, and I’m not saying this is the solution. It just seems like a lot of money to provide substandard care.”—RSH

Mental Health is a crisis that is expected to grow as we get the pandemic behind us.

“I’m establishing the groundwork for a proposal to combine resources from Medicare and Veterans Healthcare to supplement State funding to deal with their mentally ill citizens and create a more streamlined, responsive nationwide infrastructure for Seniors, qualified Veterans and the mentally ill for a lower cost to taxpayers. We’re spending way too much, especially for a grossly inferior and unresponsive system, that at times lacks any compassion.”—RSH

AMERICAN PROSPERITY—A VISION OF WHAT COULD BE!

What if? What if we could cure the problems caused, ignored or prolonged for generations?

We could invest in our 50 Million Students with a long-term Trust Fund that would be available at age 18 and age 21 and aged 25. Respectively, for training, supplemental income and if there’s anything remaining, maybe a downpayment on a house. The rules could be set in future guidelines based on the totals available after each graduating class.

Starting a Transitional Training Program could be funded incrementally. If Congress could prioritize funding after Priority Healthcare to contribute $600 a month to an individual Trust Account for each of 50 Million students, $360 Billion would available to build up the Transitional Training Infrastructure, then provide more of each Student’s Trust Fund to them after high school to age 25. With more individual funding available as the program matures.

There are a myriad of times Americans need help getting to that next stage of life. An on-going program combining Veterans, Americorps, Opportunity Zones & a 21st Century Homestead Act would give anyone that needed more training or support to help themselves or support their family a boost to that next rung.

BUILT-IN HELP FOR THOSE MOST IN NEED—Building and supporting the transitional training infrastructure will have built-in jobs and would benefit the priorities of low-income housing, reducing poverty and providing equal outcomes of opportunity.

Focus would initially be on providing opportunities to Americans in the 8,764 underserved opportunity zones to build and support that infrastructure.

Examples of Transitional Training—There are too many to list completely. Some are:

The State of Nevada is an island in a sea of Federal land, with 13 million acres. Only about the total of Maryland and Hawaii combined.

Growth is hobbled by land and available water.

The agreement that controls our access to water from Lake Mead is 100 years old in November. Drafted in 1922 when Las Vegas was a stopover.

Now, of course, we’re a booming metro area and the greatest destination ever known.

This area is the best place on Earth to generate electricity from Solar PV panels, yet that industry still struggles to prosper.

Our outward growth is restricted by access to Federal Land. After a 20 year drought on the Colorado River Basin and heroic conservation efforts our hopes that snowfalls and other conditions in the upper basin are fading, yet a sense of urgency doesn’t seem to exist.

There must be steps taken to expedite access to water now to ensure that if the drought continues we have a proactive and preemptive plan.